They call it the Queen City for a reason but, we just love their Barbecue!  So while LiV Charlotte is being built, visit Charlotte and try some of the best barbecue in the south! And to wet your appetite, check out this blog post by www.charlottesgotalot.com

Where to Find Charlotte’s Best Barbecue

Curb your ‘cue craving at one of these beloved Charlotte barbecue joints. 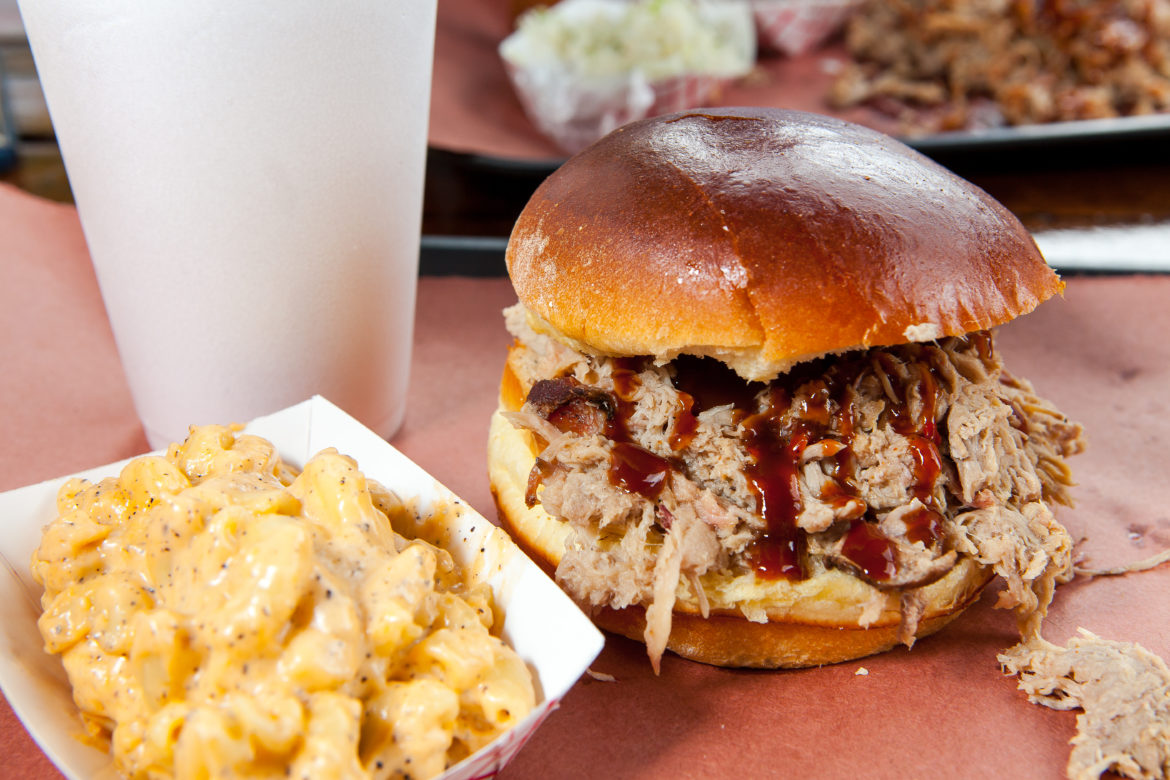 From those serving up whole hog to pork shoulder, burnt ends to brisket and smoked wings with a few racks of ribs in between, this comprehensive list of Charlotte-area barbecue joints is sure to fire up your craving for stellar local ‘cue.

Art’s BBQ and Deli is a second-generation family business that has been embraced by the Dilworth neighborhood since it opened its doors in 1976. Customers come to Art’s, which boasts a familiar family feel, low prices, exceptional barbecue plates and hard-to-beat Brunswick stew, for breakfast and lunch. Of course, you can’t miss the daily off-the-grill specials. 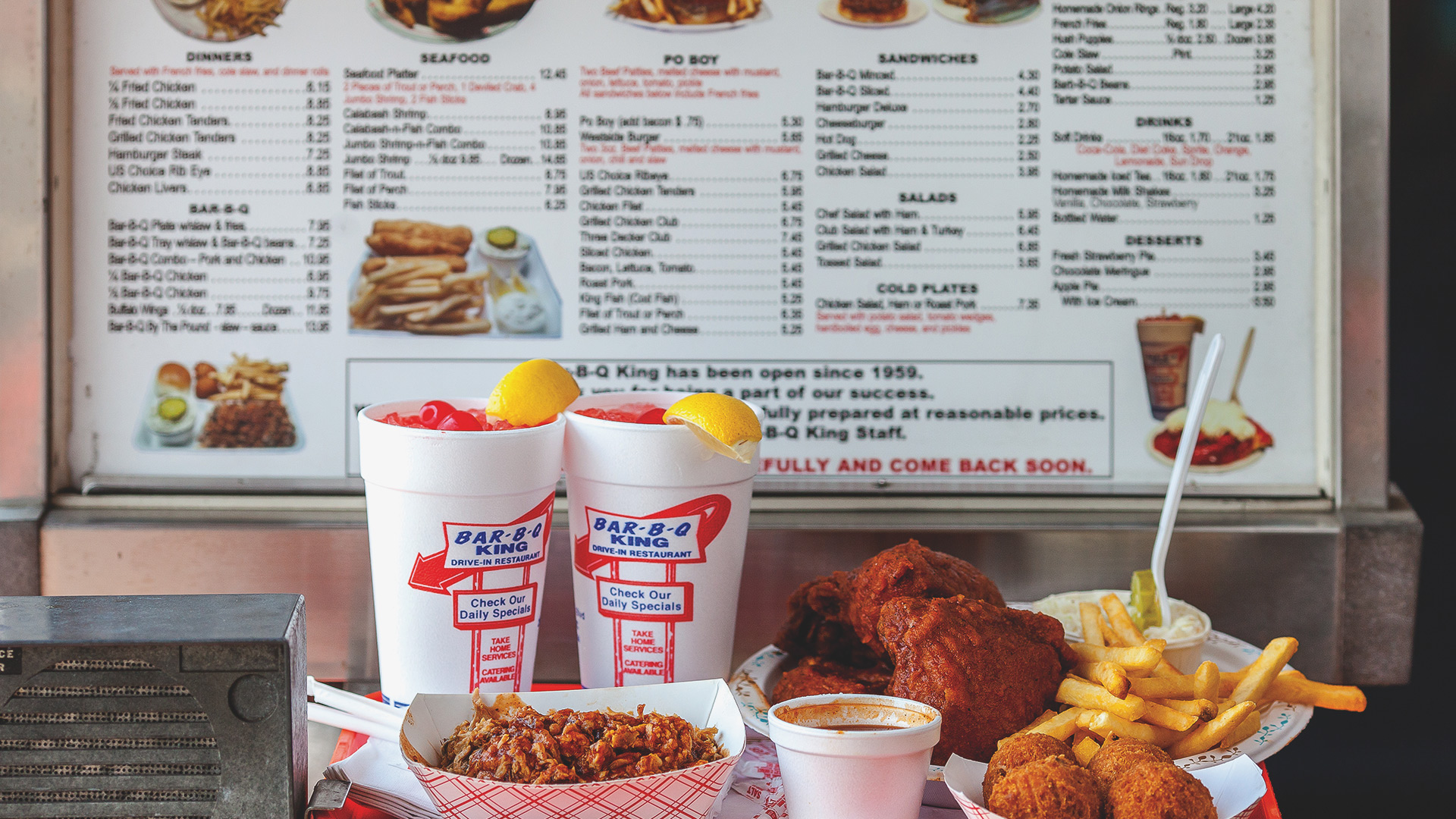 A West Charlotte treasure since 1959, this historic drive-in still serves barbecue sandwiches curbside. Come to Bar-B-Q King for an authentic park-and-eat experience, and don’t leave until you’ve demolished an order of the famous Bar-B-Que fried chicken, which comes dunked in barbecue sauce. Guy Fieri and the crew from Food Network’s “Diners, Drive-Ins and Dives” made the drool-worthy dish known to national TV audiences. 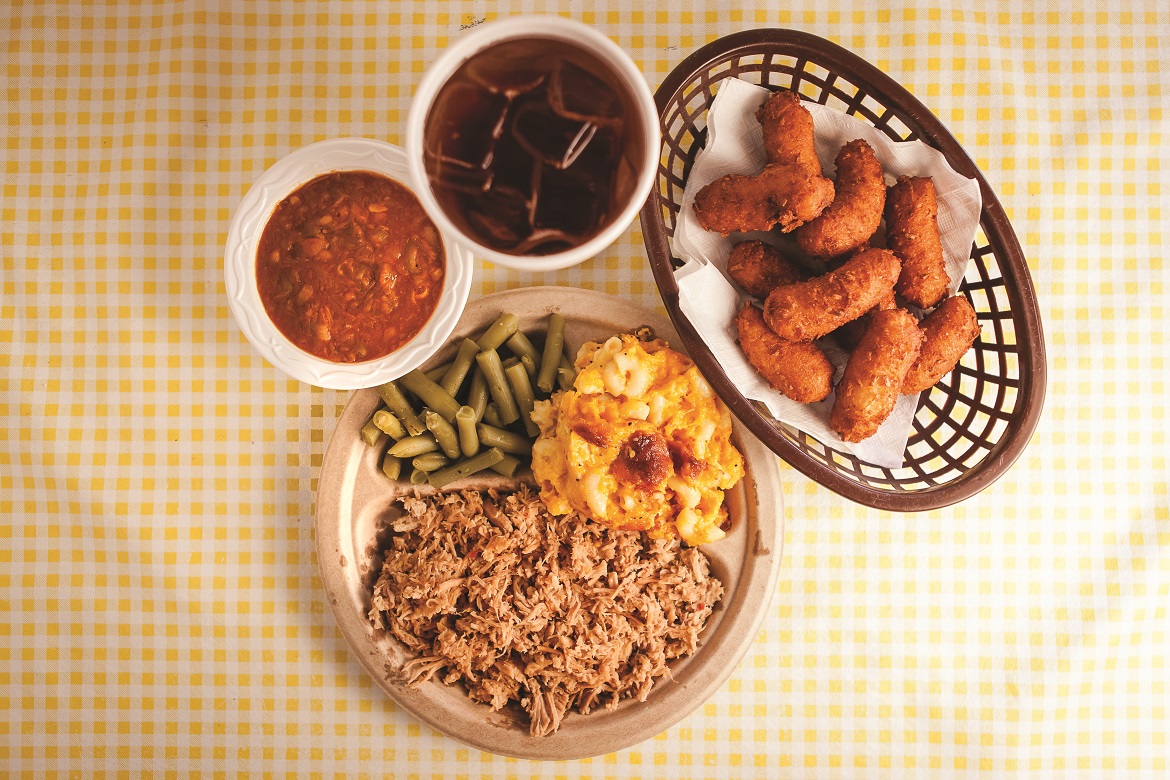 Bill Spoon’s Barbecue has been serving award-winning whole hog barbecue for about half a century. In fact, when the spot originally opened, South Boulevard wasn’t even called South Boulevard; it was Pineville Road, a two-lane country road. While a lot has changed in Charlotte in 50 years, Bill Spoon’s original recipes and Southern hospitality have stood the test of time.

Claim to fame: The sauce

Originally from Rowland, North Carolina, Bob Roberts always loved helping his mom in the kitchen. His love of cooking carried on through adulthood, at which point he started perfecting his barbecue and homemade sauce techniques. While you can’t go wrong with any of the choices at Bobbee O’s BBQ, the pulled pork is the most popular because it truly puts the spotlight on the sauce. The focus is fitting; the spot’s slogan is, “It’s all in the sauce!”

Boone’s Bar-B-Que Kitchen brings the ‘cue to you in food truck form. Charlotte native Dan Boone’s recipes have been handed down through generations of his family. They guide him in creating fan favorites, like pulled pork and low country Brunswick stew, which are bursting with flavors that evoke fond memories for Boone.

Travis Dickey opened the first Dickey’s Barbecue Pit in Dallas in 1941. Today, there are dozens of Dickey’s franchises across 43 states in the nation. Despite the widespread presence Dickey’s enjoys, some things never change: starring Texas beef brisket, pulled pork, ribs and an array of other meats, Dickey’s Barbecue Pit still slow smokes all of its meat on-site, just like Travis did in the earliest days. 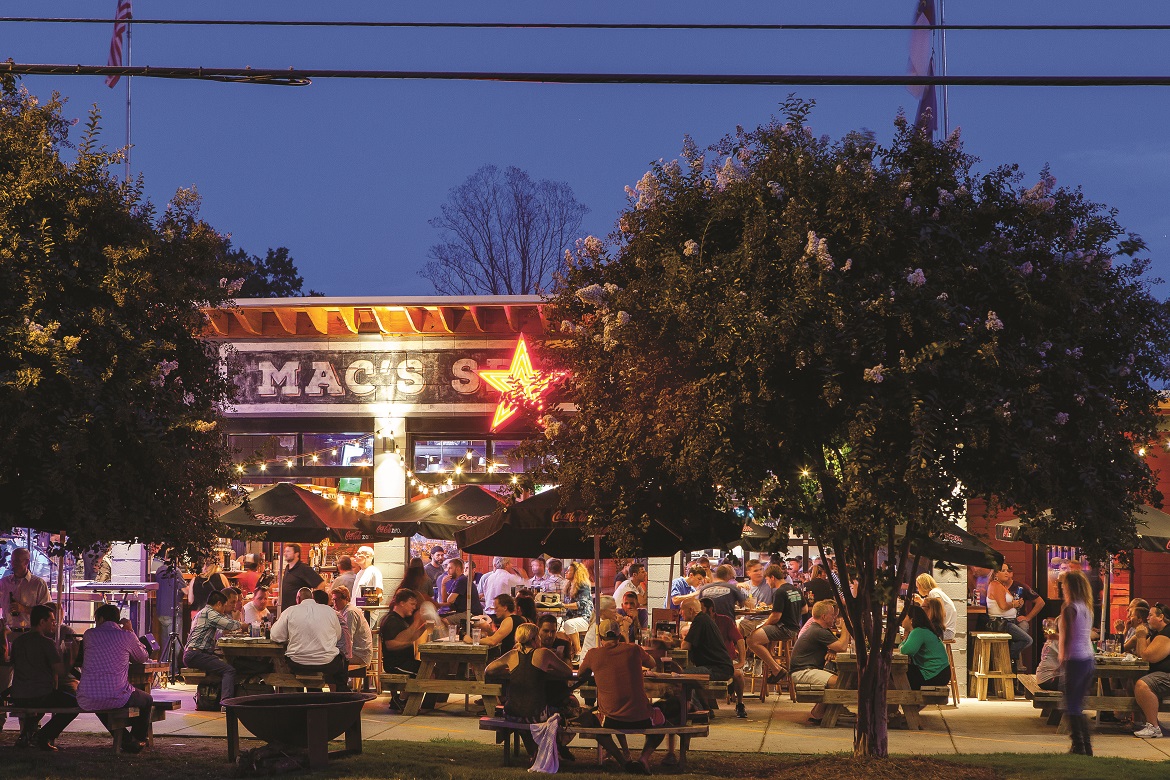 Named after a man who used to work in the old transmission shop that’s now home to the South Boulevard location, Mac’s Speed Shop serves Carolina-style, smoky pulled pork, dry-rubbed beef brisket and a menu full of distinctive Southern fare. Pair your pulled pork with a side of cold craft beer; the homegrown chain boasts more than 60 beers on tap and even sponsors a beer club.

McKoy’s Smokehouse & Saloon is a true family operation, right down to its name. The moniker pays homage to McKoy Register, grandfather of co-owners Ryan and Jim Register and father of co-owner Namon Register. The spot serves up award-winning St. Louis-style ribs, smokehouse wings and other barbecue mainstays with a side of service that make’s guests feel like they’re dining in McKoy’s home.

Restaurateur Frank Scibelli toured barbecue joints throughout Texas and picked up invaluable tips before debuting his popular concept Midwood Smokehouse in Charlotte. The cooks on Midwood’s culinary team each attend a professional brisket school, where they learn the tricks of the trade (including how to burn hickory logs 24 hours a day) to slow smoke the restaurant’s Texas-style brisket and burnt ends.

“You name it, we smoke it” is the motto of one of Charlotte’s favorite food trucks, OooWee BBQ. With sandwiches, meat plates, barbecue egg rolls, and sundaes loaded with macaroni and cheese, baked beans, coleslaw, barbecue sauce, and your choice of meat, OooWee BBQ has a little bit of something for everyone.

Claim to fame: Carolina-style everything

Based on a mutual love for great barbecue and what they considered “A lack of [great barbecue] in Charlotte,” friends Bryan Meredith and Craig Utt opened Queen City Q in Uptown in February 2012. Here, you can satisfy your appetite for Carolina-style brisket, ribs, smoked sausage, chicken and pork. Queen City Q operates four Charlotte-area locations as well as concession stands at BB&T Ballpark and the Spectrum Center. 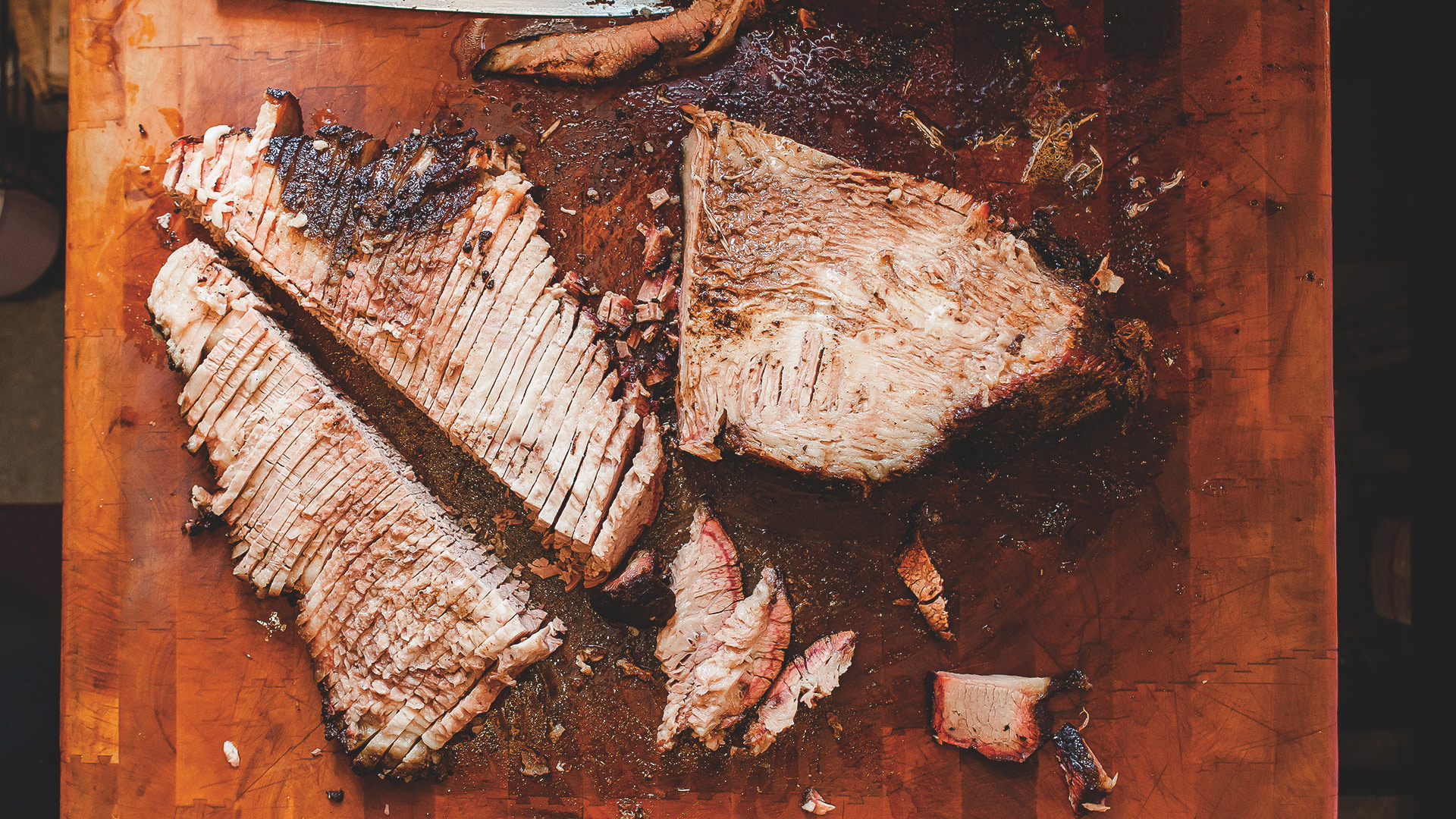 Barbecue is king at this mainstay for smoky goodness in Gastonia. Serving old-school smoked barbecue and traditional sides, Ray’s Country Smokehouse-Grill boasts plenty of pig to pair with its tasty, homemade vinegar-based sauce. Not in the mood for pork but want the barbecue experience? Order one of Ray’s most praised dishes, a hearty plate of beef brisket and zesty potato salad. 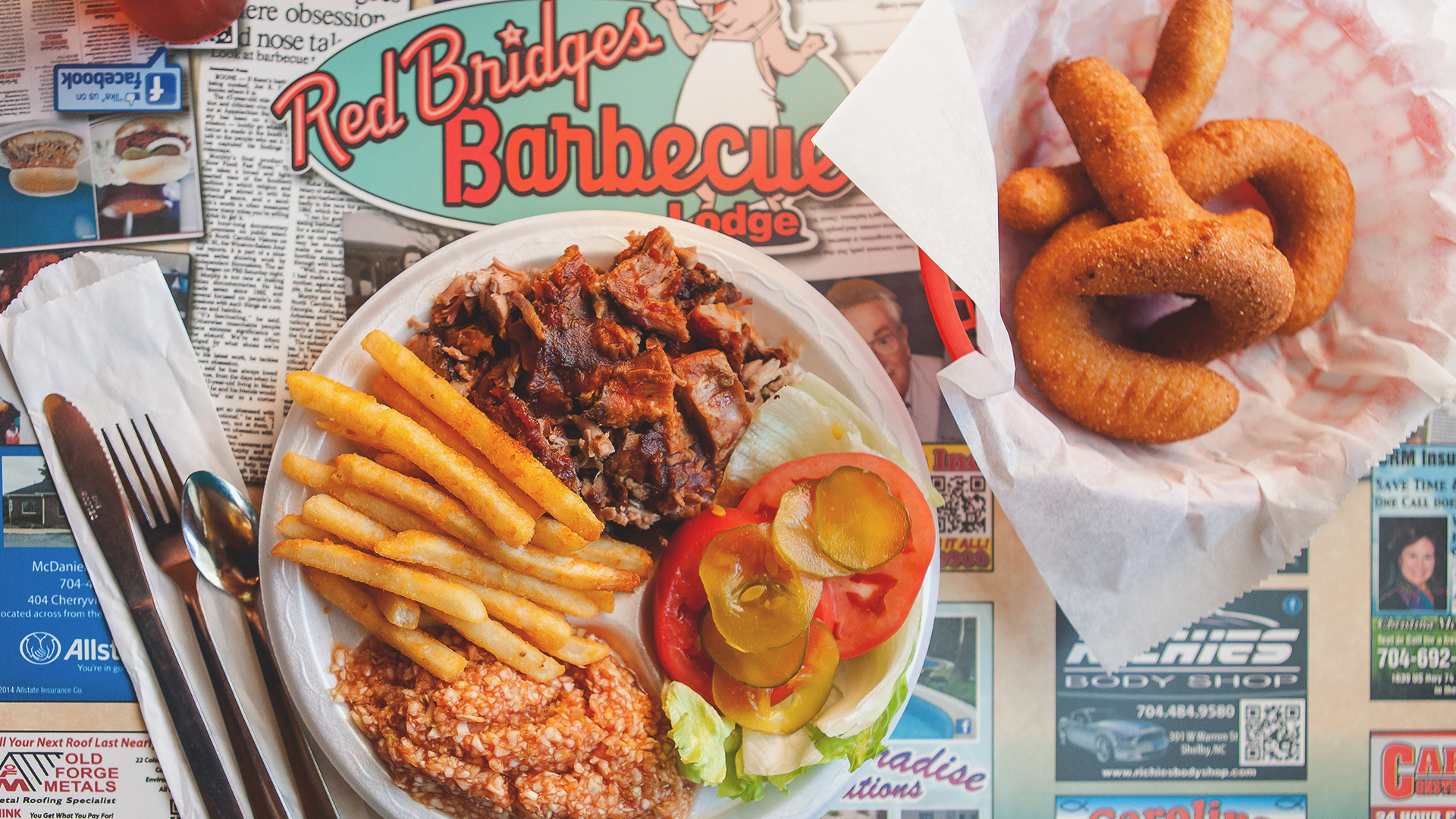 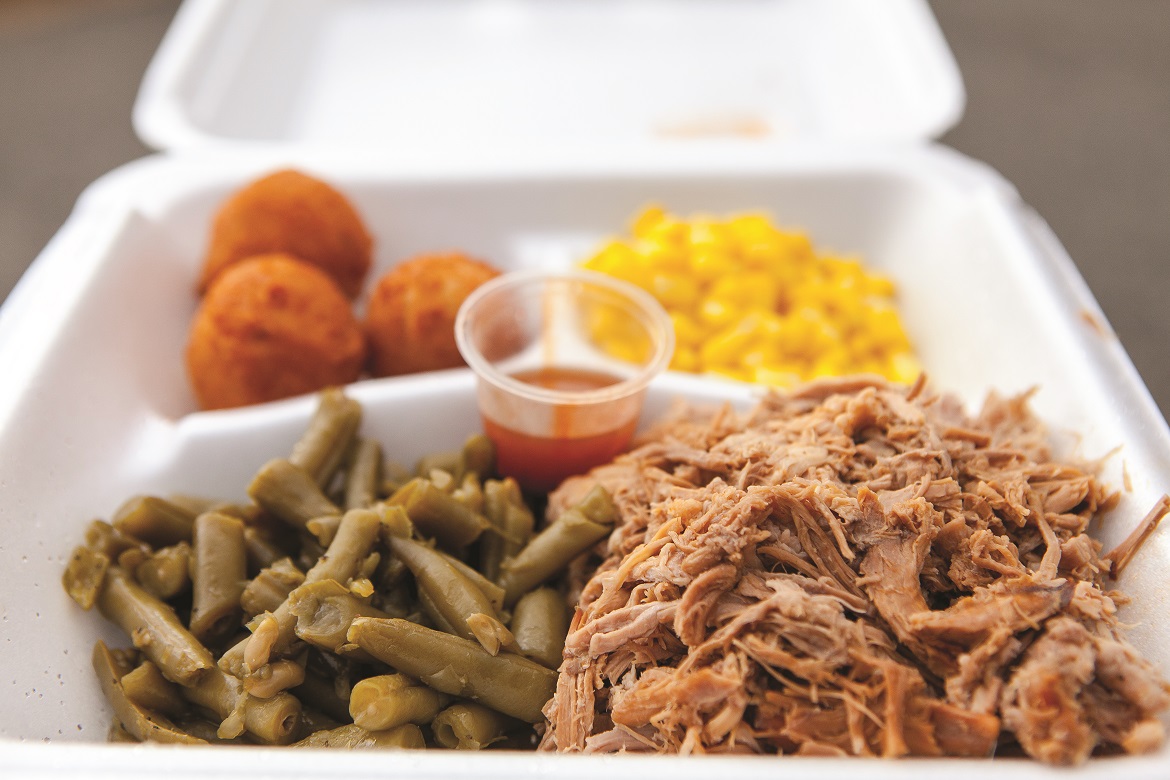 Bob Critz and Rob Emore share more than just a name; they also share a love for true eastern North Carolina-style vinegar-based barbecue. With a shared initial and a restaurant located next to railroad tracks, R&R Bar-B-Que opened in 1998, and it’s been serving up eastern-style ‘cue with all the fixins’ ever since.

Since 2010, Sauceman’s has been serving authentic Lexington-style barbecue in Wilmore. Sauceman’s smokes its pork for hours over a mix of hickory and oak wood to infuse it with an oh-so-recognizable regional flavor. Order your pork plain or “on the bun” with a side of red or white slaw and crispy hush puppies.

Claim to fame: The sampler plate

This barbecue mecca originally hails from Gainesville, Florida, but it’s been serving its signature oak-smoked meats in the Queen City since 1978. With five restaurants in the Charlotte area, one is never far from a Sonny’s Sampler: a pitmaster’s pick of all the restaurant’s slow-smoked favorites. Also engaged in the community, Sonny’s recognizes hometown heroes with a complimentary barbecue feast through their Random Acts of BBQ program.

Claim to fame: The sandwich combo

What started in 1936 as the only gas station for miles around Stallings, North Carolina, now serves some of the area’s best barbecue to locals and visitors. All of Stallings Rock Store Bar-B-Q’s meats are smoked overnight with a blend of hickory and cherry wood. Then they’re hand-pulled to ensure the highest quality product. Try the sandwich combo; for just $6, you get your choice of sandwich, side and drink, and as the locals like to say, “A little taste of home!”

Leave your regional barbecue debates at the door and become a barbecue explorer at The Improper Pig, where barbecue from all over the country and world is celebrated. The menu is a combination of classic Carolina-style pork and St. Louis-style ribs with new influences, like Southern egg rolls, Korean barbecue salmon and even a vegetarian “no pig” portabella mushroom sandwich.

If you’re on the mission for pork in a pinch, look no further than The Q Shack, a fast and casual go-to in the Promenade on Providence shopping center. The chain, tucked into an upscale strip mall, will satisfy your ‘cue cravings with its popular hickory-smoked pork butt sandwich or chile-rubbed beef brisket.

Since opening its doors in December 2014, The Smoke Pit has been filling the bellies of nearly 700 patrons each day. Massive portions, flavorful meats and creative, scratch-made sides—think deviled egg potato salad and smoked pork barbecue beans—have garnered the diner a loyal following